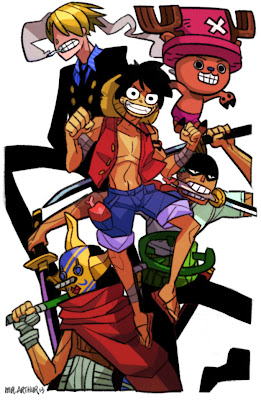 Should really  be heading to work..

ANYWAY, totally hooked on One Piece all of a sudden. And by all of a sudden I mean for the past 2 or 3 months. Or more. Remembering is hard. I've followed many bro animes in my time, and I can see some of the inspiration from things like Dragonball, but something about One Piece.. it's pacing can be torturous, some of the writing can be very irritating, but- it sounds super cheesy- but when it gets into things like camaraderie, dreams, life passions.. it completely relates for some reason. And I find myself totally and emotionally invested. Needless to say, friggin' love One Piece.

Also, would have drawn all the characters of the crew, but ran out of space.
at 10:30 AM 0 bottles of beer

Was bored, so I drew this ninja guy. Don't know if I'll color him or anything. 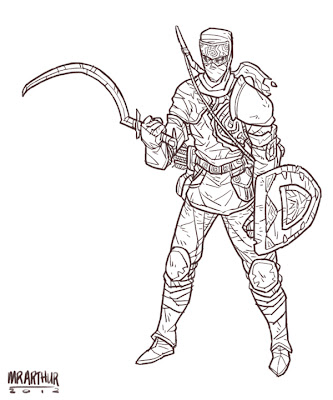 I have been drawing stuff, I swear! I just haven't really been good to my blog for a long time. I'd probably take me a few weeks to post all the things I've neglected to post. There are so many more things I want to get done, but just never have the time to do it. Maybe I should take a break from my job. And be poor for... a few months...
at 9:50 AM 1 bottles of beer

Noodlin' the Doodles at Work. 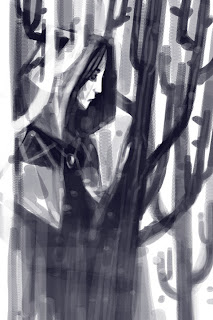 Doodled this tree person. Don't really know why, but hey, it was fun. And that is the end of that story.
at 12:42 PM 2 bottles of beer

This is Athanatai, our psionic.. what was it.. wizard? I forget. Magic McWielderson. There are so many magic people in my group, I forget the specifics (says the guy with bricks for brains). Oh, and she's our resident femme fatale. Well, as femme fatale as you can get in a guild dubbed the "Lady Tendrils" (did I mention that already? Yeah, we're the Lady Tendrils.. long and rather stupid story). She likes to flirt. And create force shards. As far as my character (and myself) is aware, those are her most prominent features. Well actually no. In my character's perspective, she's the one that tends to blow stuff up in my face every once in a while. 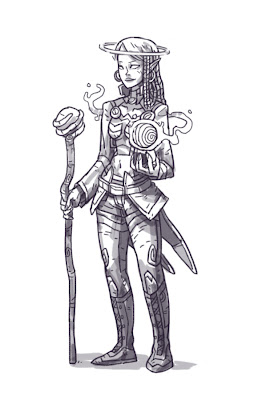 She usually apologizes for blowing stuff up around me, but.. who says sorry with a smile? Hm...
at 9:05 AM 0 bottles of beer

A little creepy if you think about it...

Watched "the Secret World of Arrietty" today. Well, yesterday. What does it matter. It was cute. Cool visuals. I feel like they could have played up the "little people borrowing big people stuff" part a little more. Or a lot more. I find the idea of living as a tiny little person in an actual size person's world very appealing. It makes mundane life environments seem like an adventure setting. It would probably take a tiny person an hour to get from one side of a house to another. I'd probably take them about 5 minutes to get across my studio, but I figured I'd try imagining it anyway. So I took some pictures of my studio and drew little people in them. Well, I've managed to draw one. Was planning on drawing a lot more of them, but... it's getting late (lol. excuses). 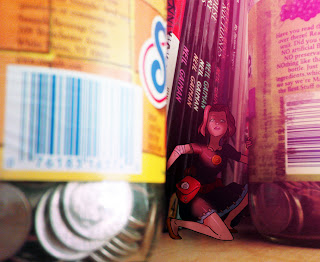 What is she doing, hiding behind my Snapple bottles filled with loose change? Does she want to read those Sandman comics behind her? Well, at least someone's reading them. I'll get to them. Soon... Probably.

Also possibly worth noting, I watched the movie in both English and Japanese. It's interesting how they differ. In the English version, the characters are more direct with their emotions, choosing to be more vocal with their thoughts. The Japanese version is far more subtle, to the point that you pretty much have to guess what everyone is thinking half the time. I don't know if I have a preferred type of storytelling, but I do like the music in the Japanese one better. The weird Disney pop at the end is quite painful.
at 11:00 PM 1 bottles of beer

To start off our D&D group's characters, here's our creepy winkin' rock god bard, Quinn. He has a suspicious interest in old libraries... 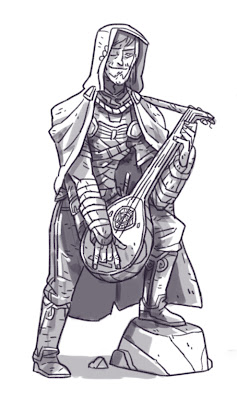 Another day at work.

Who draws comics about work over the weekend? This guy.

Who has two extra fingers masquerading as thumbs? This guy.
at 7:35 AM 3 bottles of beer

Well, at least from my perspective anyway. It seems blogspot has changed quite a bit since the last time I updated. I wonder if it will finally accept gif animation uploads... That would be fun. Maybe even fun enough to get me back into a somewhat consistent posting groove. 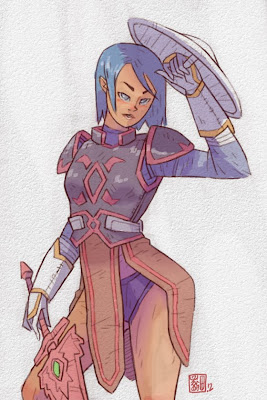 Anyway, I was doodling this, and since I hadn't posted in a long time, thought I'd post it anyway. Have been playing Dragon Quest IX. This is my character, Pancakes (again), as she would appear in much sexier form. As apposed to super chibi, which is how she appears in-game. Was kind of going for a watercolor thing. Then I got tired of working on it and started drawing something else. We'll see how that something else goes. Oh, I guess something else I can post a bit later are the D&D characters I doodled for my friends and myself. I have discovered that D&D is fun.
at 9:14 AM 3 bottles of beer 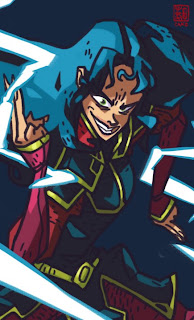 whilst working on a project of mine (will post about that soon enough. should all be done by the end of the month. hopefully...), i had avatar: the last airbender running marathon style. i dont know how i forgot, but azula is one of my all time favorite villains. SHE SO CRAZY. so i doodled her in her mental meltdown mode. not perfect, but i really shouldnt be doodling random things right now. so busy omg.
at 12:29 PM 0 bottles of beer

i feel guilt for making these as there are many other more important things i should be doing. strangely, i dont feel guilt when im playing the game itself. maybe because i forget i have things to do. 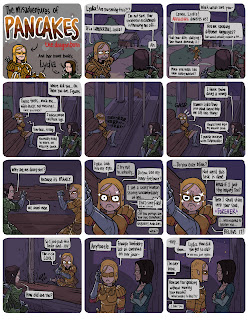 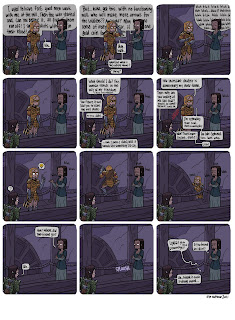 MY it has been a long time. And it's only going to get longer. That's what she said.

Anyway, I'm in the depths of Skyrim right now and the game has my soul. Here is a comic I drew of one of my many stupid adventures in the world of Skyrim. I would elaborate, but... I want to play Skyrim. Maybe later. 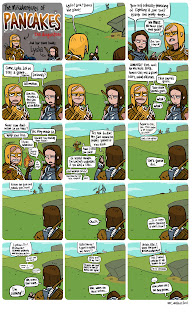 I name many of my characters Pancakes. PS. You'll probably need to open the image in a new window to read it properly, what with the new fancy picture viewer blogger has now.
at 8:46 PM 0 bottles of beer 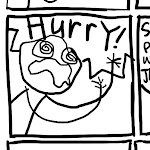 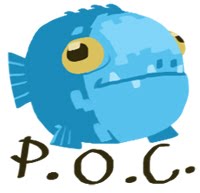 “...and when i'm done, you'll both be lovely dolls together."